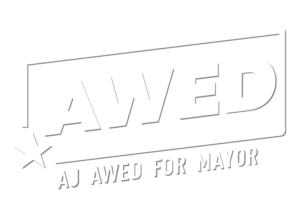 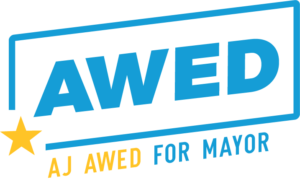 As the youngest of twelve siblings, AJ learned early that everyone has to pitch in to help keep things running smoothly. He learned to jump in where needed, the importance of accountability, and the joys that come from working together.

These lessons were instilled in AJ by his parents, and they motivate him still today – as he works every day to bring people together as a mediator.

As a proud son of war refugees, AJ was born in Somalia and immigrated with his family to the United States when he was only five years old. AJ’s early years were spent in Virginia, where his parents and siblings worked hard to afford to rent a home for their family – eventually moving into public housing.

AJ did not come from wealth or privilege. Life in the United States as an immigrant was not easy. As a teenager, AJ struggled to find direction and he dropped out of high school. He took a retail job and worked his way up from greeter to store manager. He was laid off during the Great Recession and knows what it feels like to be down and out. AJ knew he needed to make a dramatic change in his life – so he followed his gut, like many of his friends and family, and moved to Minnesota.

He knew education would be his way to a better life – so he enrolled at Normandale Community College. His results on his entry exam qualified him for college courses and he earned his Associates Degree. From there he was accepted at the University of Minnesota- Twin Cities, where he obtained his BA degree in Sociology of Law, Criminology and Deviance – going on to become the first Somali-American student commencement speaker at the University of Minnesota’s College of Liberal Arts.

AJ has always been fascinated by the law and would later earn his Juris Doctorate from Mitchell Hamline School of Law with an emphasis in ‘Alternative Dispute Resolutions’ – and earning certifications in both ‘Mediation’ and ‘Conflict Resolution’.  During his time there, AJ lead the law school to third place in the ‘International Chamber of Commerce Commercial Mediation Competition’ in Paris against 65 teams from 32 countries. He eventually served as a Law Clerk in the Ramsey County Public Defender’s Office – where he learned the importance of public legal service.

Throughout his life, AJ has seen people struggle, and he too has faced many of his own challenges. AJ knows that good fortune and faith, along with dedication and – yes – hard work, provided opportunities for him and helped him to understand better the ‘American Promise’.

To AJ, the American Promise means all of us are inherently equal, and each of us must respect and defend the liberty of others; and the government – and those wielding its authority – must not unjustly deny our neighbor’s constitutional rights or hamper our exercise of them.

This Promise is different than the American Dream  – that’s a question of opportunity and economic attainment.

At its core, the American Promise is about a person’s basic value and our local government’s fundamental obligation to protect each of us – and our rights.  And AJ believes municipal governments especially have an extra ‘duty of care’ to all of their residents.

We all know City Hall must do better – and there’s a long way to go.

This understanding is the foundation of AJ’s core belief of service to others. He knows that we can build a city that unlocks opportunities for everyone without preference to privilege or wealth.

AJ’s entire professional life is focused on service to the public. He is a Fellow at the American Arbitration Association and serves on the Board of Directors at Community Mediation and Restorative Services (CMRS).

As a mediator, AJ worked with clients on the Hennepin County Housing Court and the Hennepin County Harassment Court. He has worked to help vulnerable clients stay in their homes and find resolutions to related conflicts and issues. AJ resolves private business disputes in the growing East African community through facilitative mediation.

AJ proudly serves as the Executive Director of the Cedar-Riverside Community Council – the officially recognized City of Minneapolis neighborhood organization – where he leads the organization’s community outreach, resident empowerment, and policy objectives.

As the former Vice President of the Somali-American Bar Association, AJ has led efforts within education to combat the abuse and discrimination of workers, teaching assistants, and students.

AJ’s campaign is fighting for a powerful set of policies that will reshape housing in our city, minimize inequality in city services, and reverse the negative impacts that growth has on our city neighborhoods.

A long-time resident of Minneapolis, AJ currently lives in the Marcy-Holmes neighborhood along with his wife Salma and his two beautiful sons Layth and Hamza.

Hit enter to search or ESC to close